RUSI, the highly respected independent defence think-tank, hosted a panel event to mark the 20th anniversary of the lifting of the ban on lesbian, gay and bisexual (LGB) personnel serving in UK armed forces.

Chaired by Admiral the Lord West of Spithead, former CNS and First Sea lord, the panel comprised several of the military co-authors of the recently published charity anthology “Fighting with Pride” including a number of the founding board members and trustees of Fighting with Pride, the newly formed charity, established to support LGBT veterans disadvantaged by the ban.

Veterans and serving personnel shared their experiences, 20 years after the ban was lifted, describing some of the traumatic experiences they were forced to endure as well as the difficulties of serving “in the closet” under the ban.

One of those affected by the ban on LGB people serving in the armed forces was Sub Lieutenant Ed Hall. He described how he was interrogated for two days as a young man without any legal representation, before being dismissed from the Royal Navy for being gay.

This traumatic experience inspired Sub Lieutenant Hall to fight the ban. “It took six years to win, but it was part of a strange process, a strange world where there were 100, 200, 300 of us who had been sacked and were in touch with each other and were angry,” he said. “[We] were trying to find a way to get rid of a ban that we thought was profoundly wrong.”

The fight with the Ministry of Defence took Ed and the rest of the campaign group ‘Rank Outsiders’ all the way to the European Court of Human Rights. In 1999, the group won their battle.

Just before the ban was lifted, Royal Air Force fighter pilot Caroline Paige became the first transgender officer to serve openly in the armed forces, but not before she had spent years in service hiding her true identity. “I was always looking over my shoulder. It was a scary, scary time because I was really scared someone would out me,” Flt Lt (Rtd) Paige said. As the co-chair of Fighting with Pride, she wants to make sure those forced out under the ban are properly supported by the veterans’ community.

“What the charity is trying to do is to reach back to those individuals who were dismissed, who fell on hard times, who have been suffering, who haven’t had the support,” she explained.

Today, the charity Fighting With Pride wants to see equal treatment for veterans dismissed because of their sexual orientation. 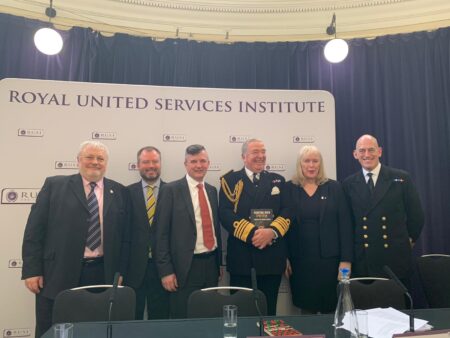