Wg Cdr Ali Russell-Brookes is a Personnel (Training) officer, who joined the RAF in 2001.

A former police constable in West Yorkshire Police, she spent the first 12 years of her career in the Provost Branch, undertaking a broad spectrum of Service Police duties including; Station Security Officer at RAF Halton and RAF Coningsby, investigation management and Professional Standards investigation at Headquarters RAF Police, and overseas tours of duty in the Falkland Islands and supporting the Op TELIC (Iraq) and HERRICK (Afghanistan) campaigns from Al Udeid. She developed her love of training, education and personal development during her posting at the Officer and Aircrew Cadet Training Unit at RAF College Cranwell, completing a part-time teaching qualification during her two years there.

Promoted to squadron leader in 2012, she undertook station security officer duties at Northwood Headquarters and Counter-Intelligence investigations in Op HERRICK before transferring branches to pursue training delivery and personal development roles. She was appointed as Military Assistant to the Commandant at the Joint Services Command and Staff College in 2014, where she completed her Executive Master’s study with Cranfield University, gaining an MSc in Defence Leadership Studies with Distinction. A tour as Chief of Staff Training Wing at RAF Halton followed, which included a six-month deployment working as the Deputy Chief Non-Kinetic and Information Operations on Op SHADER (Syria and Iraq), before being promoted to wing commander in 2018.

She is a graduate of Advanced Command and Staff Course 22, where she gained a Master of Research degree from King’s College London with Distinction. She is currently employed in the MOD International Policy and Strategy Directorate as the Desk Officer for Southern Latin America, the South Atlantic and Antarctica.

Married to Abigail, Wing Commander Russell-Brookes plays Cricket for the RAF and UK Armed Forces, enjoys travel and the outdoors, and challenging herself through academic and personal development – she is two-thirds of the way through a MBA in Educational Leadership. 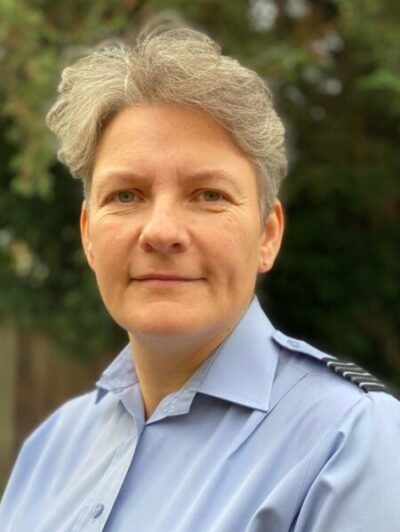