This LGBT+ History Month we would like to bring you some of the stories of LGBT+ military personnel and veterans who served both pre and post ‘gay ban’.

My name’s Roly Woods and I’m a serving Commander in the Royal Navy, currently working in the Maritime Operations Centre at Northwood HQ, from where all Royal Navy operations world-wide are controlled.

I actually joined the RN by steam train – no, I’m not quite so old that I can remember the golden age of steam (it was the Dart Valley tourist train) but the Navy I joined in 1978 was reminiscent in many ways of the Victorian era:

So, in some ways it’s hard to believe that only a few decades ago people were still being arrested, intrusively investigated, outed and dismissed or forced to resign and having their lives ruined because of government policy towards their sexuality.

I too lived the classic double life – making up stories about girlfriends and tales of straight nights out and being unable to be myself to close navy friends – not because they would out me necessarily, but to avoid putting them in a position of having to choose. A life in the shadows if you will. There was this constant weight on your shoulders 24/7; you were always on the alert about how you were behaving, what you were saying, who you were talking about, even how you were dressing, with the abiding stress of worrying about being caught out or being reported by someone in your circle of  acquaintances.

All that said, I was one of the lucky ones that pretty much got away with it – although in the mid-90’s I did have to deny being gay to my Commanding Officer when I was the Executive Officer and 2 i/c of a major warship at sea, when he asked me outright if I was gay, as he’d been told about rumours circulating in the WR about me.

But…just a few years after being challenged and having to deny my sexuality, UK law was changed, enabling LGBT personnel to serve openly in the armed forces. Initially I was still quite cautious, not fully outing myself and carrying on as I had before, to see how things developed. To be honest, things didn’t change overnight – there were still homophobes, although they were less vocal and now firmly in the wrong in the eyes of both the law and military discipline.

The Armed Forces covenant was eventually updated to support the military LGBT community and it gradually became apparent to me that the changes were here to stay, and I became more comfortable being my true, out-self. I came out to my boss (the first time I’d come out to a work colleague) – he was brilliant and provided a great deal of advice and support.

After that I never looked back – I joined the RN LGBT community, became an out and very proud naval officer and in 2006, just 10 years after fighting to save my career, I found myself leading the first ever military contingent to march in a UK Gay Pride event in uniform (which was also probably a world first for serving personnel).

What an amazing day that was – the roar that went up from the crowd as we hove into view on London’s Oxford street was overwhelming. Years of shame and darkness eclipsed, and in the most amazing rainbow coloured way possible.

Today we have LGBT forums in each service, all branches in the Armed Forces are Stonewall top 100 employers and major efforts are being made to address historic wrongs experienced by LGBT+ Veterans.

I think it’s fair to say that during my 40+ year career, good progress has been made and the UK armed forces are now rightly viewed as global leaders in their approach to, and management of, LGBT issues and as an LGBT employer. We’re also now encouraging rapid progress to ensure the UK becomes a global leader in its care of LGBT+ Veterans as well.

You can hear more of Roly’s story in the book Fighting with Pride, all proceeds go to back to the charity. 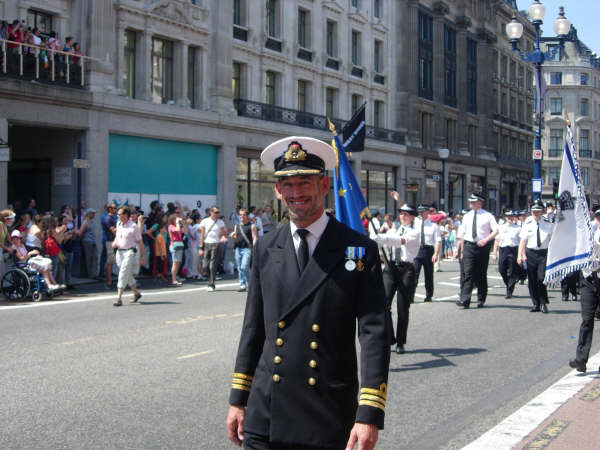